The Journey and Artwork of Claudia Shanbaum

Although it is only Cheshvan, one could easily say that the story of my mother, Claudia Shanbaum, is much like the story of Pesach itself. The Coronel (Claudia’s maiden name) roots extend back to Segovia, Spain prior to the Jews being exiled during the Spanish Inquisition. Her mother’s family found their way to Aleppo Syria, where they became Sofrim (those who write Torah scrolls) and worked in the “shmate” (fabric) business. Her father’s family settled in Gallipoli Turkey and became successful businessmen. Eventually, both families ended up in Egypt and they were, for a short time, able to live peacefully as traditional Jews alongside their Arab neighbours in Cairo and Alexandria. Claudia remembers sitting on her father’s lap in shul and learning to say the Shema. She remembers her mother showing her the Rambam’s shul and the healing powers it was believed to have. If one was not well, they would be directed to sleep there overnight and be healed. It boasted a plaque on the wall from one of the previous Egyptian kings that was healed there. During this period, the family was very comfortable – Claudia’s father built an extremely successful pharmacy business, and her mother became a dressmaker to King Farouk. Her father was, in fact, the first to import penicillin to the country.

Once the state of Israel was established, things started to become more and more uncomfortable for Jews living in Arab countries, and so was the case for the Coronels. In the 1950s, Egypt began expelling its Jewish population and seizing Jewish owned businesses and properties. Riots erupted. Shuls, Jewish owned businesses, and even Jewish homes were set on fire. As the situation worsened, my grandfather would be periodically taken from his home, harassed, and brought in for questioning. Fear and trepidation motivated him to begin crafting a plan of escape. He would set time limits such that if he were not back by a certain date my grandmother should take the children and find a way to get to Israel. In the end, through hiding, bribery, and discreet travel, they all made their way to Italy with no possessions to speak of. They lived there for 3 months, unsure which country, if any, would give them a visa.

At ten years of age, Claudia found herself learning Portuguese while living on the beaches of Rio De Janeiro in Brazil. Being the oldest of 5 children meant taking on a great deal of responsibility – not just with respect to helping to care for her siblings but also to provide financially. The family fell into extreme poverty and sometimes did not have more than a banana and bread to eat. Claudia worked in a jewellery store and as a tour guide. Although her first languages were French and Arabic, it was time to prepare for America, whenever that visa would come. Her work helped her to learn not only Portuguese but English as well.

Entry into the United States was not quite as simple as it is today, with thousands entering across its southern border at times. The Coronels waited 10 years for that first visa. After proving their ability to support themselves, my mother and grandmother were permitted to enter the US together and eventually months later the rest of their family joined them.

Once my mother was in the US, she met my father, Harold Shanbaum, an Ashkenazi Jew from Boston. They married and lived in Los Angeles for the next 30 years before making aliyah. While pregnant with me, she began simple sculpting, taking classes and making small clay sculptures and pottery. She has memories from her time as a child in Brazil of fellow students being disrespectful to their teacher and throwing chalk at her. This bothered little Claudia very much and, feeling powerless to do anything about it, she responded by picking up the chalk and carving images into it with a bobby pin. This “need to create” has defined my mother throughout her life.

One can see the depth of character and personal growth within each Claudia Shanbaum piece. She honed her skills over many years and developed a comfort with extremely bold projects. She would carve huge stones or use plaster and wax to create pieces as tall and wide as eleven feet. As her talent and recognition grew, galleries in Beverly Hills and Pasadena were promoting her work. Aside from art collectors, Hollywood took notice as well and Claudia’s sculptures began appearing in TV shows and feature films. I remember one of her collectors, a dermatologist in Beverly Hills, had one of her large pieces overlooking the city from his home at the top of Mulholland Drive.

There were times when my mother would bring me to see a new large stone that she received from a quarry in Italy and ask me what I saw in it. I always had a great imagination and found this to be fun. I would share what I saw and she would chisel away!

Over the years, Claudia’s spirituality grew alongside her artistic abilities. Her childhood education related to Judaism had been quite limited. To her, being Jewish meant that everyone hated you. She had not yet found the beauty in it. As a young newlywed, she met Rebbetzen Esther Youngreis, a dynamic speaker and Holocaust survivor. When she started saying, “We are the people that stood at Sinai…” Tears rolled down my mother’s cheeks and she wanted to learn more. It was the first time she felt special and proud to be a Jew. She began attending her “Hineni” classes and began expanding her Judaic horizons.

Over the years her love of Judaism continued to flourish. Wherever a class was taught she was the first to arrive. Like a sponge, she soaked up everything the Torah had to offer. Eventually she learned about the halachos (Jewish laws) of creating an image of mankind which led to feelings of tremendous guilt. She arranged a meeting with a Rabbi and any of her pieces that did not look “kosher” – like Avraham Avinu with the idols of his father – she destroyed. For an artist to destroy her own work, takes a lot of Mesirus Nefesh. It is really not an easy thing to do. But to Claudia, nothing was more important to her than rekindling her relationship with Hashem.

After leaving Egypt, receiving the Torah, and wandering in the desert for forty years, it was time to come home. When she and my father made Aliyah a number of years ago, they first lived in the Rova – the Old City of Jerusalem. Living close to the Arab shuk (marketplace), she would walk through it every morning at 4 am and daven Neitz (the cherished practice of davening at sunrise) with a group of women. Once they all answered Amen to each other’s Brachos (blessings) she would glance over to the men’s side admiring the shapes of their beautiful Talleisim (prayer shawls). Her Tallis series, released just a short time ago, depicts the motion and emotion of prayer to our creator. Each piece is unique but come together to form a single Minyan. In the pictures below you can see how Claudia has shaped the “Tallesim” using wax and plaster molds as a precursor to casting the final bronze sculptures.

The Tallis series is but the most recent addition to the hundreds of pieces that make up Claudia’s life’s work. She has a breathtaking portfolio that incorporates materials of stone and metal and spans the realistic through the abstract – all infused with the spirituality that is now Claudia’s defining characteristic. 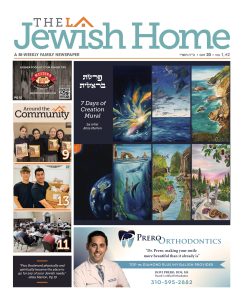