Artist Aliza Marton in the Kitchen with Chef Nir Weinblut

Nitsa was born in Israel in 1948. She grew up in a Sephardic home. Her parents came to Palestine from Istanbul, Turkey. They met and wed in Israel. She was born the year Israel became a state, and for that, they named her Nitsa – nitsachon (victory) in Hebrew.

After her army service, she went into banking and then met her future husband, an electrical engineer, and they wed and had one child, Nir, in 1969 in Tel Aviv. In 1974 they decided to emigrate to the United States and they started their life on the East Coast.

Coming from engineering and banking backgrounds, they both wanted to earn more money to supplement their regular jobs and started working at a kosher pizza shop some evenings and weekends. Falling in love with the industry of cooking and hospitality, Nitsa opened four restaurants in New Jersey. She was the pioneer in changing non-kosher recipes and adapting them to the kosher world. With the opening of Jerusalem Pizza, they developed the concept of the kosher pizza shops, with over 20 salads daily, hot Italianstyle dishes, as well as basic pizza and falafel.

After a divorce in the mid-1980s, Nitsa decided she needed a change of scenery, and after a quick trip to the West Coast, she decided to put her two young kids in the car and make the move there, from New Jersey to Marina Del Rey, California. Working at local restaurants in Los Angeles, and not content, she was introduced to one of the top kosher caterers in Los Angeles. Starting in the pastry department with the top French pastry team, she quickly moved up to become the executive chef and run the entire back of the house.

At the same time, her son Nir was attending university and decided to join the catering family, changing his business/psychology career to a culinary one. Quickly, the team of Chef Nitsa and Chef Nir ran the show, and with a big following of clients and friends, the two decided to open their own catering company, which led them to opening La Gondola Restaurant, Los Angeles, as a base for their business. La Gondola was the first kosher restaurant not situated in the kosher neighbourhood. With a powerful business lunch clientele, which happened to be mostly not kosher, they were able to bring a more kosher clientele for dinner time. After 16 years in the Miracle Mile/Museum Row area on Wilshire Blvd, Los Angeles, the property was sold and they were forced to move. Finding a great location in the heart of Beverly Hills, they moved their entire business there and opened a private room plus catering showroom in the new location. Chef Nitsa and Chef Nir just celebrated their 30-year anniversary with the La Gondola family. Joining their management team is Jonathan, Nir’s son, who has become part of the executive team, and now La Gondola is run by three generations working together.

Nitsa and Nir have created a restaurant that is just not a place to eat; they have created an institution where for the last 30 years people have celebrated some of their happiest and most special occasions. Because they also do full-service catering, they get to keep in touch with their clients, seeing them grow and staying connected.

“Most caterers will cater a wedding and then disconnect; we are lucky that we get to make new friends and see them grow, with their families all part of the La Gondola family. There is nothing better than seeing people post family photos with the La Gondola background, making us part of their special occasion. We feel that our restaurant dining room is an extension of our home dining room.

“We are proud to say that in the last three decades we have catered for kings and queens, presidents
and presidential candidates.”

La Gondola has opened its catering areas to all over California: from San Francisco to San Diego, all the way out to Las Vegas. One of their biggest accomplishments was when Chef Nir was hired to cater in Dubai for a kosher delegation team from all over North America, and this was over nine years ago, before the peace talks took place there. Bringing all the kosher meats, dairy and kosher groceries, Chef Nir stayed in the Burj Khalifa’s Armani Hotel and partnered there with the executive team to cater for the group all week long. Catering for the top businesspeople and politicians of the Middle East, and his Royal Highness of Dubai on several occasions during his five trips, he has made it out there. Many world records were broken while they served meals on the 155th floor of the Burj Khalifah. They served underground while looking at the gorgeous fountains overlooking downtown Dubai on the largest manmade pool in the world.

Other accomplishments include being flown out to the White House on two different occasions and meeting heads of state and presidents. One big honour was being asked to cater for, and personally meet, every prime minister of the State of Israel, besides many other government officials of the last 30 years.

Without naming all the celebrities who walk into their restaurant on a daily basis, it would be true to say that La Gondola is probably the most celebrity-visited kosher restaurant in the country. With all the hard work it takes to keep the doors open in the restaurant business, it’s the great friends and families who eat there daily and share their stories that make it all worthwhile.

“We saw over 800 people come out to celebrate with us all night long.

Our customers are our friends and family. We really felt the love there that night. That is what makes it all worthwhile.” 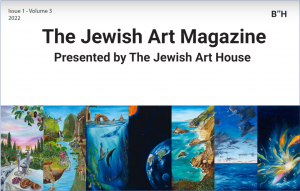 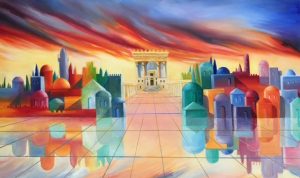 Artist Aliza Marton in the Kitchen with Chef Nir Weinblut